The Most Expensive Whisky Ever Sold at Auction

We all know that you don’t have to break the bank in order to get your hands on a very fine bottle of whisky indeed. At its heart, whisky is an egalitarian drink, enjoyed by rich and poor all over the world. Even the lower-priced bottles from traditional distilleries in Scotland, Ireland and the Far East are sure to bring that distinctive, warming, multi-layered sense of pleasure and satisfaction.

Despite that, fine whisky lovers of the world can’t help but shiver in excitement whenever an aged bottle breaks a new record, or hits a new high when sold at auction. The top end of the whisky market is booming right now, as buyers look to time-honoured distilleries selling seriously old bottles with distinctive stories to tell, and are happy to pay astronomical prices to add them to their collections.

Every year, new all-time high price records are smashed, and often the bottles which achieve these sums are those which bring together several artisanal crafts and skills at once. Naturally, the distillation process is key – nobody’s going to pay top dollar for a spirit which doesn’t show remarkable artistry in its creation – but on top of this, many of the most sought-after bottles are also those encased in beautiful glassware, and which have been cared for across the decades before being released to the wider world.

Let’s take a look at the five lots of fine whisky which smashed their way into the record books at auction. It’s the stuff that dreams are made of… 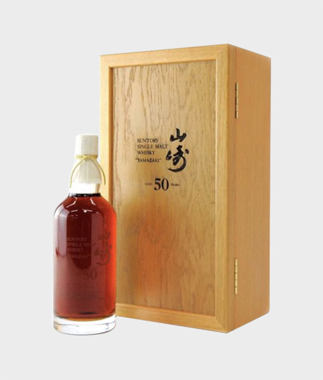 If there was ever a testament to the rising star of Japanese whisky making, then this bottle is surely it. The 50 year old Yamazaki sold in Sotheby’s Hong Kong is the highest price ever paid for a single bottle of Japanese whisky, and demonstrates beyond all doubt that Japan really has fully established its place at the table of the world’s finest whisky producing nations. Investment in this brand is booming right now – indeed, the bottle sold for double its expected price – and experts predict it won’t be long before this particular record is broken again. 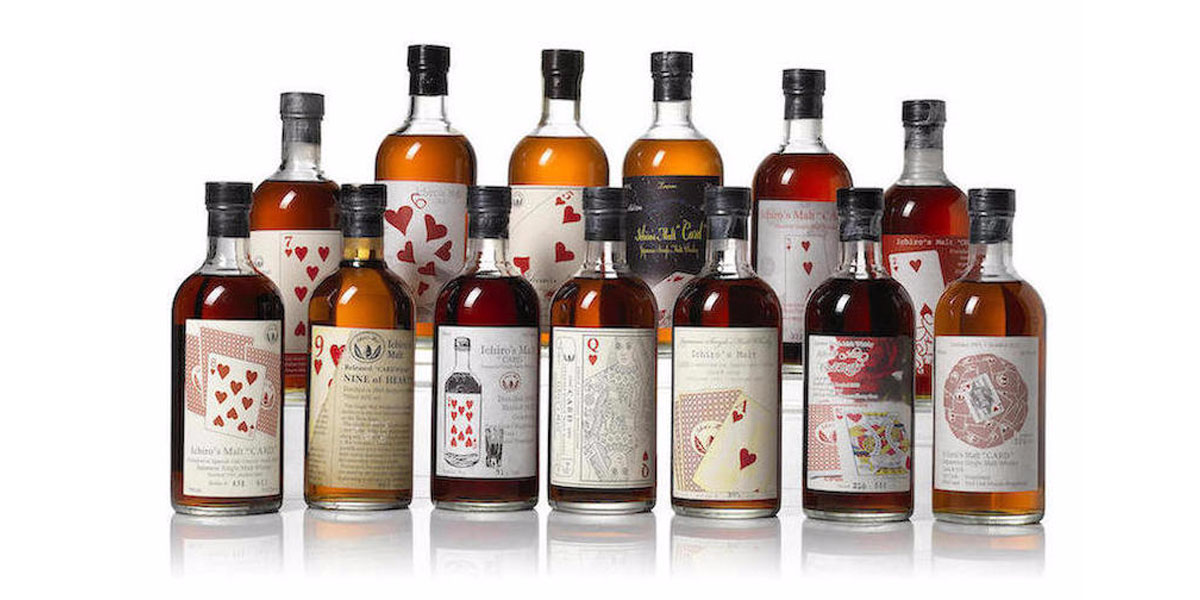 Yet another Japanese legend on this list, and one which is considered to a true unicorn of a collection. These beautifully presented set of 54 bottles – each labelled with a playing card – is the most valuable lot to have ever come out of the legendary Hanyu distillery, which closed its doors for the last time in the year 2000. Each of the bottles showcases the unique skill and vision of distiller Ichiro Hanyu, and demonstrates the potential of what can be achieved with different aging times, different casks, and different uses of the crystal-clear mountain water used by this iconic distillery. 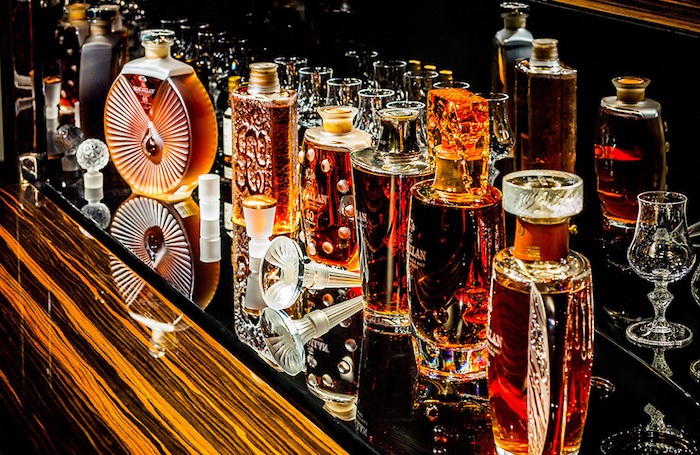 This lot elicited gasps of joy when it was unveiled at Sotheby’s New York in 2010, and it isn’t difficult to see why: it’s a thing of utter beauty, and would undoubtedly be considered as such by even the most dedicated teetotaler. The decanter is an incredible example of the skillful work of Lalique – a legendary French glassware company and perfume house – all elegant curves and art nouveau engravings. However, what’s inside the bottle is equally as exciting; the oldest and rarest Macallan whisky to ever be sold at auction. If you’re balking at the price, and wondering why anybody would pay such a sum for what is actually a relatively small quantity of our preferred tipple, well, calm yourself down – the whole lot was donated to charity.

Housed in another imposing Lalique bottle (this time a sharp, modern, almost art deco-inspired design from the iconic glassware company) this whisky is one which will doubtlessly remain in lists of the most expensive spirits for decades to come. The ‘M’ Imperiale was the result of 50 hours of craftsmanship, which a team of seventeen artisans created for a limited run of just four bottles… only two of which have ever been released for sale. 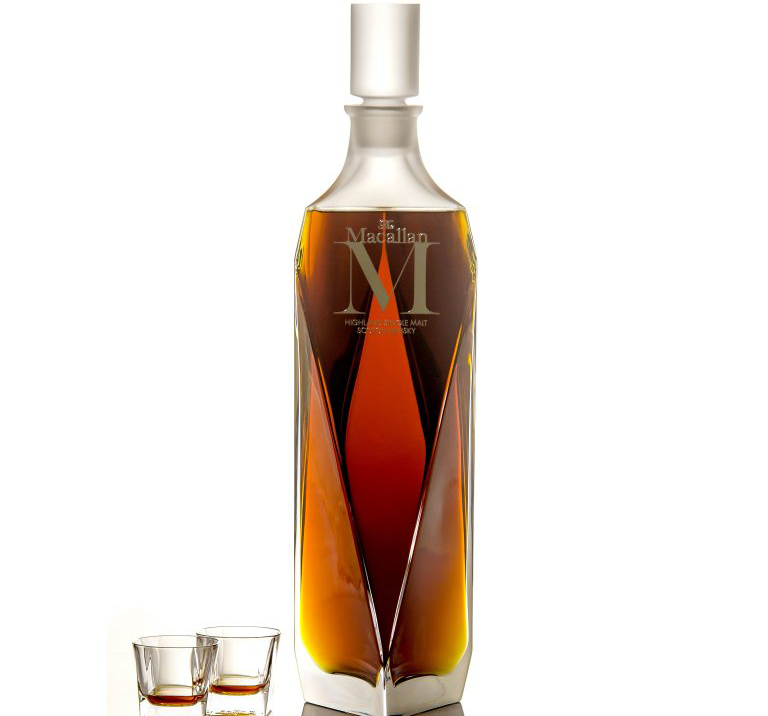 Sold Sotheby’s in Hong Kong back in 2014 for an eye-watering sum, this bottle was the only one to feature the engraved signatures of the men who oversaw its production. At six litres, though, at least the anonymous buyer was getting their money’s worth…

You might be noticing a trend here: Macallan and Lalique seem to have taken it upon themselves to become the world’s greatest collaborators when it comes to fine whisky and beautifully decadent bottling. It’s clearly a team effort which is more than paying off, though, as this incredible lot attests. 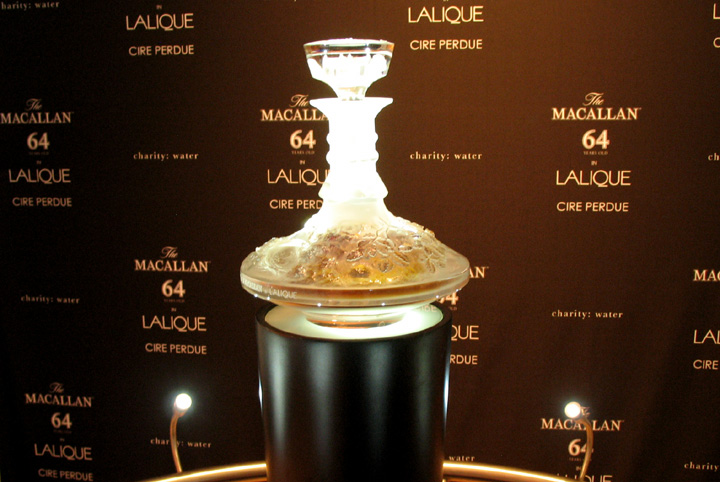 Looking more like the crown jewels than a collection of whiskies (and worth a similar sum), the Macallan in Lalique Legacy Collection is the zenith of elegance and sophistication. The Macallan whiskies are all aged between 50 and 65 years, and each one shows off the master distillery’s skill and vision when it comes to imbuing simple mountain water and grain with a quasi-magical property. The bottles themselves are all unique, one-of-a-kind examples of Lalique’s incredible talent, and the collection is housed in – what else? – a signature display cabinet, made from the finest ebony wood. If you still think that over a million dollars is a lot to pay for six bottles of whisky, bear in mind that there were also a few extra Lalique bottles and Macallan miniatures (from the 1930s, no less) thrown in for good measure.